Ok, by now, anyone familiar with MMA should know that Nunes knocked Cris Cyborg the fuck out. Now, I’ll be honest, fam. On the real, I didn’t give Nunes much of a chance, bruh. Like, I legit looked at Cyborg like the Terminator, son. But, to be fair, I also believed that if anyone was capable of pulling off an upset, it was Nunes. Real talk, I gave Nunes a slight glimmer of hope because she hits fucking hard, man! So, in my head, if by some miracle she caught Cyborg with the right punch, she might be able to pull it off. Well, I was right AND wrong, folks. Yes, she did catch Cyborg with the right punch. But, she also caught Cyborg with like 20 other “right” punches, people. I mean, Nunes beat the SHIT out of her, brethren!

For God‘s sake, what else do I have to say, son? Nunes took out 6 of the most notable champions in MMA history. From my vantage point, this puts her FAR ahead of her competition, man. At this point, Holly Holm is the only one who hasn’t taken the L yet. Side note, that’s probably coming, fam. All I can say is, I don’t see Holm beating Nunes. Anyway, it’s time for us to acknowledge that Nunes is the greatest, bruh. Hell, it’s not even fucking close, folks.

In the end, all hail the GOAT! Ultimately, Nunes solidified her place in history, son. By and by, I was hyped as shit to see it, man. At the end of the day, that’s all I have to say, fam. Viva la Amanda Nunes! That is all. LC out. 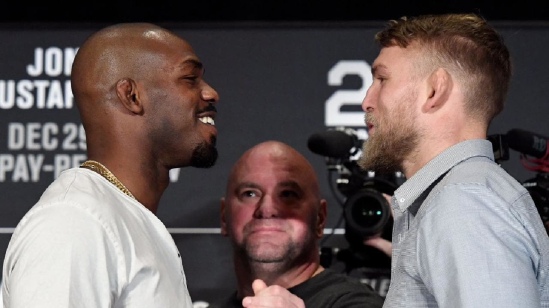 So, let me begin this post by saying that I am a huge Jon Jones fan. Actually, I take that back, son. I WAS a huge Jon Jones fan. I mean, let’s be real, man. At this point, if anyone doesn’t believe that Jones is a cheater, they’re fucking delusional, fam. All I know is, the lead-up to UFC 232 has been a straight shit-show, bruh. The fact of the matter is, Dana White, Jeff Novitzky and USADA are okay with Jones being a cheater because he’s one of the UFC’s biggest names.

Ok, for those who have been living under a rock, Jones has tested positive (again) for a banned substance. Now, by my calculations, this is the fourth time he’s run afoul of the drug-testing committee. First, he was busted before UFC 200 and was pulled out of his rematch with Daniel Cormier. Next, he was busted for “tainted dick pills” after his win against Ovince Saint Preux. After that, he was busted for turinabol after his knockout win against Cormier. In any case, that last failure is most notable because turinabol is the same substance that was found in his system last week. All I can say is, I’m fucking done with Jon Jones, son.

Now, according to the “experts,” the turinabol found in Jones’ system is a “residual” effect of the drug discovered last year. Meaning, this isn’t a new ingestion and he was already punished for this before. Furthermore, turinabol is said to linger in a person’s body for 12-18 months. Anyway, with all of that being said, I still have MAJOR problems with this story, man. Look, according to Jeff Novitzky, UFC’s Vice President of Athlete Health and Performance, Jones first passed a drug test on August 9th. Then, he failed tests on August 29th and September 18th. Then, he passed four consecutive tests. Finally, he failed his most recent test on December 9th.

Look, that timeline sounds like pure horseshit to me, fam. If Jones has “residual” turinabol in his body, then why are his test results all over the place? Shit, he passes one test and then fails the next one. All the while, the amount of turinabol they find increases with each positive test. Bruh, if USADA doesn’t get the fuck outta here, son! It’s all fucking nonsense and shenanigans, man! Like, let’s call a spade a spade, folks. Real talk, the UFC wants Jones back because he’s a high-profile name. Frankly, they don’t care that he’s a habitual doper, brethren. On the real, a Jones fight equals pay-per-view buys. So, they just let him get away with anything, people. Regardless of that fact, I’m done with Jon Jones. No more bullshit, Bones.

In the end, this is a sad day for me, son. Ultimately, Jon Jones is the reason I started watching MMA, man. By and by, that’s not enough to continue my allegiance, fam. At the end of the day, there need to be some consequences for his actions, bruh. He can’t keep fucking up and walking right back into a title shot, people. The way I see it, the “undefeated” fighter needs to finally lose, folks. So, I hope Alexander Gustafsson knocks him the fuck out on Saturday. That is all. LC out.

Man, didn’t I just try to give Daniel Cormier his props? Didn’t I just tell people that we needed to respect what he’s accomplished? With that being said, why is he now out here ducking the smoke, son? Look, I’m a Derrick Lewis fan, but even HE said that he doesn’t deserve a title shot, fam. So, why would the UFC make this fight when Jon Jones and Stipe Miocic are lurking out there? Frankly, it looks like Cormier doesn’t want to risk losing his Heavyweight belt to a real challenge, bruh. All in all, he’s looking real funny in the light right now, folks.

Ok, for those who missed it, Cormier is now scheduled to fight Lewis during UFC 230 at Madison Square Garden. For me, this is a little wild since Lewis literally JUST fought Alexander Volkov at UFC 229. Furthermore, this is even weirder because Lewis almost lost that fight. On the real, Volkov was beating his ass the entire match, son. Shit, if Lewis didn’t land that right hand in the third round, it would’ve been an easy victory for Volkov. So, is THAT the performance that earned Lewis’ shot at the belt? Hell nah, man! Look, even Lewis knew he wasn’t ready after that fight. Like, he specifically spoke about his lack of cardio, fam. Real talk, I don’t understand this move at all, bruh.

To me, there’s only one explanation for this, son: Cormier doesn’t want to fight anyone who could legitimately take the belt from him. Listen, after being cleared to fight again, there was speculation that Jones might enter the cage against Cormier for a third time. Instead, he’s about to fight Alexander Gustafsson at UFC 232 for the Light Heavyweight title that Cormier is not defending. Side note, in my eyes, the belt was never Cormier’s anyway. I mean, he never beat Jones, brethren. It’s that simple. In any case, ex-champ Miocic has already campaigned for a rematch against Cormier. Even worse, he previously said he’d be ready for UFC 230, the same event where Cormier is fighting Lewis. Nah, son, Cormier and Dana White are looking real suspect out here, man.