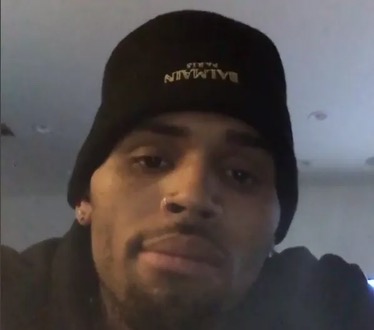 Throughout history, there have been many examples of individuals who appear to be allergic to doing the right thing. Whether we’re talking about DMX, Bobby Brown or old school Robert Downey Jr., some people just seem impervious to prospering in life. I think it’s beyond safe to say Chris Brown is one of those individuals. Regardless of how many chances this dude gets, he always seems to find himself in some stew of fuckery. At this point, after his latest run-in with the law, I’ll be very surprised if he doesn’t find himself back in prison. However; this time, it might not be for a small stretch, son.

Ok, look, anyone with an internet connection should be aware of what’s happening with Brown right now. Yesterday, ol’ buddy was arrested for assault with a deadly weapon after Baylee Curran, a former beauty queen, accused him of pulling a gun on her in his home. According to her story, she was “admiring” some of his jewelry when Brown lost his cotdamn mind and pointed a weapon at her. Side note, I put “admiring” in quotes because it appears Curran isn’t new to stealing things and running off on the plug. As it stands now, the NYPD is looking to speak with her regarding a theft at The Plaza Hotel back in 2013.

In any case, after calling 911, the police arrived on the scene and attempted to search Brown’s home. When he demanded that the officers retrieve a search warrant before entering his house, a standoff ensued with the police waiting outside. To make matters even worse, Brown, apparently, threw a duffle bag out of his window, which reportedly had several weapons and drugs inside. On the real, this entire episode sounds like some shit that would happen in an HBO drama, son. I swear, it’s impossible to make this dude’s life up, man. He always finds himself in some type of high-level tomfoolery.

With all of that being said, I literally can’t understand what’s wrong with this dude, man. Even if it comes out this woman was trying to steal a chain or something, why is his first reaction to pull a gun on her? Why is he always showing large amounts of aggression towards women? Why on earth would he be in this kind of predicament with his daughter in the house? Why haven’t any of his handlers stopped him from being HIM yet? Good Lord, man, this guy continues to spiral out of control and no progress is being made. Hell, the man has already gone to prison for being an idiot, so what’s it going to take for him to realize he’s a detriment to himself and everyone else around him? He can’t keep claiming that people are trying to assassinate his character when he doesn’t alter his lifestyle in the slightest. If I spent my days doing drugs, hanging with bum-ass dudes and consorting with questionable women, then yeah, I might be in trouble a lot too. That goes for any of us, bruh.

All I know is, it doesn’t look good for this guy, son. He’s already got a felony on his record, and if he’s convicted of this latest offense, he’ll have yet another one. If this dude isn’t careful, he might completely ruin what’s left of his career. I mean, he’s already destroyed his destiny of being the next Usher, bruh. All in all, he’ll be lucky if he’s able to sing at all after this. Good day.