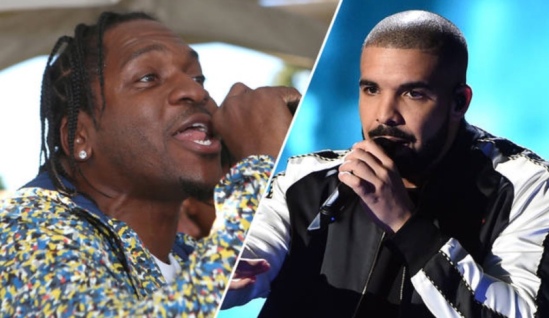 So, let me begin this post by saying that I’m a HUGE Pusha T fan. I mean, ever since the Clipse dropped Lord Willin’ in 2002, I’ve been a stan, son. Side note, as my boy Fabian can attest to, I fronted on that album when it first came out. Nevertheless, I repented for my sins like a day later. In any case, I’m also a big Drake fan, man. With that being said, I’m happy that they’re throwing caution to the wind and letting the shots fly, fam. All I know is, after listening to “Duppy Freestyle,” the first round of this battle goes to Drake, bruh.

Ok, before I continue, let me keep it a buck, son. On the real, I don’t have the time to fully explain the history between Pusha and Drake, man. I mean, I’ll just let Highsnobiety do the work for me, fam. All in all, the feud between Pusha and Drake began as a feud between Pusha, No Malice, Lil Wayne and Birdman. Needless to say, Drake inherited the beef when he signed with Young Money. Crazily, this is a squabble that’s been going on for damn near a decade, bruh. All I can say is, that’s a long time to hold a grudge, people.

Anyway, the latest round of this beef began when Pusha’s DAYTONA album dropped. Now, the last song on the record is “Infrared,” and Pusha takes aim at the entire YMCMB. He references the fact that Quentin Miller has written rhymes for Drake. He references the fact that Birdman still owes Wayne a grip of money. He also references the fact that Rick Ross has been saying the exact same shit about the Cash Money team. Side note, everyone should go listen to Ross’s “Idols Become Rivals,” son. Just thank me later, pun intended. In any case, the Kanye West-produced “Infrared” is a hard response to Drake’s disses in “Two Birds, One Stone.”

Now, from there, I guess Drake had enough, man. So, instead of another round of subliminal shots, Drake went straight for the jugular, fam. Real talk, “Duppy Freestyle” isn’t even about me and it hurt my feelings, bruh. Shit, that’s how rough it is, folks. Basically, Drake airs ALL of the dirty laundry about Pusha and Kanye. He talks about the fact that he wrote Kanye’s rhymes on “30 Hours.” He talks about the fact that he was just in Wyoming helping them to pen verses. He talks about Ye being jealous of Virgil Abloh, his former creative director, for running Louis Vuitton. He questions the validity of Pusha’s drug-dealing past. Lastly, that “you older than the nigga you running behind” line is particularly gruesome, son. All in all, sheesh!

In the end, the ball is now in Pusha’s court, son. Ultimately, he has a real uphill battle, man. Not because I don’t think he’s capable, but because Drake’s celebrity makes things A LOT harder. Look, even if Pusha’s response is fire, Drake’s fanbase will kill him regardless. By and by, Pusha needs to just focus on these bars, fam. At the end of the day, I’m giving him until the end of the day, bruh. Listen, Pusha can’t let this shit rock, people. Good day. LC out.

P.S. Despite everything I’ve just said, Drake might’ve weakened his own kill shot with that “I’m Upset” record, son. I mean, that song is hot garbage, man. Side note, I can be a fan and still call a spade a spade, fam. Needless to say, this song ain’t it, bruh. That is all.