So, I won’t lie, son. Real talk, I was trying my hardest to avoid this Nicki Minaj and Joe Budden situation, man. I mean, we have two people who like to shout and talk over people, fam. The fact is, shenanigans were damn near inevitable with these two in a room, bruh. Moving on, I’m not here to debate the validity of their respective arguments. On the real, I’m only here to talk about how she disrespected Rory, Budden’s podcast co-host.

*Sigh* Where do I start, son? Ok, the tomfoolery began when Budden went to Nicki’s Queen Radio show on Apple Music. Now, I think it’s safe to say that Nicki didn’t appreciate a lot of the narratives that Budden started on his show, The Joe Budden Podcast. Namely, she didn’t like the idea that she wasn’t knowledgeable about the smoke Cardi B had for her on Migos‘ “Motorsport.” In her eyes, people like Budden perpetuate the idea that she’s always being catty with other women rappers. In addition, she hated the fact that he suggested she was on drugs.

In any case, during the show, she went “hamburger helper” on Budden, man. Like, he couldn’t get a word in edgewise, fam. Shit, she basically shouted at him until security removed him from the premises, bruh. Needless to say, after this debacle, the internet lost its shit, son. However, this isn’t the end of the story, folks. Now, despite getting cursed out, Budden still had Nicki on as a guest on his podcast. From there, they continued their conversation about her place in the music industry.

Now, with all of that being said, let me get to the crux of the matter, man. Look, Nicki believes there’s a “hate train” against her. She believes that she’s unfairly maligned and constantly under public attack. Side bar, I personally think that a lot of it is bullshit and that she has an inability to critique her own behavior. But, that’s another story for another time, fam. Anyway, Budden’s podcast went off of the rails when she turned her cannons on Rory. Frankly, homie didn’t deserve the heat that came his way.

Basically, Rory tried to say that Nicki shouldn’t put so much of her focus on what people say about her on social media. From there, she bugged the fuck out, bruh. Hell, she proceeded to yell at him for the next ten minutes and insinuate that he was vilifying her for defending herself. Next, she suggested that she was going to make up a false rumor about Rory, just so he knew what it was like to be “lied” on.

Son, Rory’s entire point was that the opinion of random people on the internet should not matter to a person of her stature. Like, who gives a fuck about the Twitter account of someone with an egg avatar, man? At no point did he say that she was wrong for sticking up for herself. His only point was that internet trolls shouldn’t be given any power, fam. Responses fuel these idiots. Keeping it a buck, their thoughts don’t fucking matter, brethren. But, instead of comprehending what he was trying to say, she decided to shout at the top of her lungs and refuse to let him speak. Yeah, really mature, Nicki.

In the end, that podcast hurt my ears, bruh. Ultimately, if folks aren’t trying to have a civilized conversation, then there’s no point, son. By and by, I hope Nicki finds peace, man. All I know is, she’s one of the biggest artists in the world and shouldn’t pay this much attention to negativity, fam. At the end of the day, the music is all that matters, bruh. That is all. LC out.

P.S. What’s really good with Mal, son? Listen, I’ve heard him say NUMEROUS times on the podcast that cyber bulling isn’t real, man. Well, where was that hot take for Nicki, fam? Shit, he was quiet as a church mouse while she was on the rampage, bruh. All I can say is, if cyber bulling isn’t real, then Nicki’s problems aren’t real, brethren. The truth is, he should’ve kept that same energy. Good day.

So, let me be real, son. I’m not going to sit here and pretend like I know what’s going on with Joe Budden and Cyn Santana. All I can say is, Budden seems to be a little confused about his relationship status. Well, I’d like to clear it up for him. *Ahem* She bounced, bruh. Look, anytime a woman moves all of her shit out of the crib, she’s probably serious, man.

Ok, for those who missed it, the engagement between Budden and Santana is seemingly off. Now, there were rumors circulating around that the two were having pre-marital issues. But, I generally don’t pay attention to what gossip blogs have to say. Furthermore, I don’t pay attention to a woman’s shady comments on social media. Shit, I’ve been in a situation where a chick was throwing darts at me online and we were still very much together. In any case, my ears didn’t perk up until Budden responded to the rumors at a live episode of The Joe Budden Podcast.

Now, while speaking to his audience, Budden asked if a relationship can be over if neither person verbally said it was over. In addition, he stated that he hasn’t talked to Santana in weeks and that she moved her shit out. Side note, uh, don’t they have a kid together? So, wouldn’t her moving out also include their son? Yeah, I’m going to need Budden to move with a greater sense of urgency, fam. In any case, while Budden was pontificating about a wordless breakup, Santana was telling people on Twitter than actions speak louder than words.

Look, let me be perfectly clear here, bruh. If Santana left the crib, took their son AND stopped speaking to him, then yeah, that’s a breakup, son. Now, does that mean they can’t work it out? Of course not. However, if Budden is missing all of these telltale signs, then he might have no hope of getting his woman back, man. Keeping it a buck, I have no idea what they’re beefing about. But, he can’t be walking around this clueless, fam. Ay, Joey, go call her, brethren.

In the end, relationships can be a motherfucker, son. Hell, I’ve been in a relationship with the same woman for eleven years now, man. With that being said, I’m an expert in the vernacular of “when a woman’s fed up.” Ultimately, Budden needs to wake the fuck up if he wants to save his union. That is all. LC out. 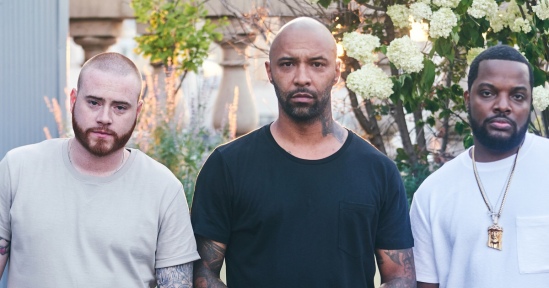 So, it’s no secret that I’m a Joe Budden fan, son. I mean, I’ve already written about that on this very site, man. Shit, even before The Joe Budden Podcast with Rory and Mal, I was there for his debut album and entire Mood Muzik series. In any case, after all of these years, it’s super dope to see what he’s been able to accomplish with his podcast, fam. As of right now, I just hope that his new deal with Spotify works out for the best. All I know is, Budden might have the best rebrand in history, bruh.

Ok, for those who missed it, Budden just announced that he teamed up with Spotify to distribute his podcast. Now, according to the details, the show will be released exclusively through the streaming site, but will remain free for the listeners. Furthermore, Budden will now release two episodes per week, but still update his YouTube channel with content. Lastly, all of these changes will take place in September.

Keeping it a buck, I don’t know what else to say, son. Hell, this is just a dope ass move for Budden, Rory and Mal. Listen, I’ve been tuned into the podcast from the beginning (word to Marisa Mendez). So, I’ve seen the show through all of its incarnations, man. On the real, Budden’s podcast and The Joe Rogan Experience are my favorite joints to listen to, fam. With that being said, it’s about damn time that Budden and company got some recognition, bruh.

In the end, shout-out to Joe Budden for staying the course, son. Ultimately, he’s done AND been through a lot of bullshit along the way. Needless to say, he’s found a way to make it all work in the end. Shit, the New York Times just likened him to Howard Stern, but it wasn’t necessary, man. At the end of the day, Budden’s crazy ass is finally getting acknowledgement for being himself. That is all. LC out.