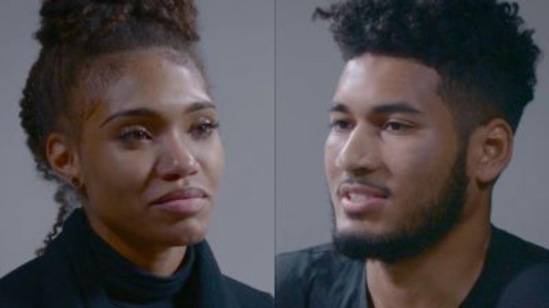 So, let me start this post by saying that I might make a few people upset today. Now, maybe it’s just me, but I wasn’t moved by this “Hurt Bae” video circling around the internet. While it’s clear that infidelity ruined the relationship between Kourtney Jorge and Leonard Long III, I still had so many questions when the video was over. In actuality, this video strengthened my resolve when it comes to cheating in relationships. The way I see it, a lot of people out there need to read what I’m about to write.

Ok, where do I begin? So, Leonard apparently cheated on Kourtney like it was a recreational sport. She asked him how many times he stepped out on her and he legitimately couldn’t give her a number. He beasted that many times, son! She even described a scenario where she walked in on him smashing another chick and HE told HER to leave. Wow, son! Fucking wow!!! Now, even after all of that, she STILL took his ass back!

In any case, during this discussion, he tried to reinforce the fact that his “commitment phobia” was the real problem. He expressed to her that she was the perfect girlfriend and there was nothing she could’ve done to prevent his behavior. On some level, it’s good that he’s owning up to his fuck shit, but I still have so many issues with this entire situation, man.

At one point, he flatly asked her why she stayed. She said it was because he was her best friend. Look, baby girl, FUCK ALL OF THAT! What kind of “best friend” consistently disrespects someone they claim to love? It’s not like he made one or two regrettable mistakes, man. This dude made it a point to keep on fucking other women. He wasn’t thinking about her feelings or her well-being during his shenanigans. She does not owe him any type of bond or affection. He clearly has not earned it.

Moving on, here’s the part that most people don’t like to hear: if Person A disrespects Person B on a frequent basis, then it’s now Person B’s fault. People can only do to us what we allow them to. If we keep on rewarding an undeserving person with our love, then we cannot complain when they continue to hurt us. We should’ve learned our lesson by now. Kourtney never learned her lesson and Leonard kept on abusing her devotion. It got to the point where she was checking his phone AND his emails, man. Yet and still, she didn’t leave him. I truly don’t get it, son.

Now, when it comes to Leonard, be an adult, bruh. Don’t just put the prospect of leaving the relationship on her. If he knew he couldn’t be faithful, then there was no need for him to be in this union. He could’ve left at any time. Instead, he chose to stick around and be a fuckboy. He can question her for staying, but I question him too. It takes maturity to be honest about intentions and Leonard behaved like a child. Grow up, son! Either love that woman or let her go.

Ultimately, the both of them are at fault here. She’s at fault for sticking with him and he’s at fault for not holding her down. I hear women constantly talk about how they stand by their cheating men, while the reverse is rarely true. Look, women shouldn’t get points for holding down a cornball. In my eyes, it’s better to leave than to be repeatedly hurt. Then again, what do I know? People are still going to do fuck shit, son. *Sigh* LC out.

P.S. Everyone can watch the original video I’m referring to below. That is all.