So, this dude Floyd Mayweather just can’t seem to stay retired, huh? I mean, every time he says he’s done fighting, he finds some new way to gank folks of their money, son. In any case, since he doesn’t want to fight actual boxers anymore, he’s going for anything that will drum up attention. First, it was his bout against Conor McGregor, who had no professional boxing matches on his record. Now, he’s planning to fight Tenshin Nasukawa, an undefeated kickboxer/MMA fighter from Japan.

Ok, for those who missed it, Mayweather just held a press conference in Tokyo. Now, apparently, on December 31st, he’s fighting Nasukawa at the Saitama Super Arena in Saitama, Japan. Furthermore, this match will be promoted by the Rizin Fighting Federation. With all of that being said, there are still a lot of details that we don’t know. First, we don’t know what the rule set of the fight will be. I mean, we all know Mayweather is a boxer, so is he really trying to engage in leg kicks and takedowns with Nasukawa? Shit, that could be disastrous for Mayweather, man. Look, as a man who’s been kicked in his legs and choked before, I wouldn’t recommend it to a novice, fam. Side note, both instances happened in a gym, bruh. I don’t need anyone out there thinking that I’m getting helmed up in these streets. I’m just saying.

In the end, we’ll see, son. Ultimately, Mayweather doesn’t move unless the bag is involved. So, I’m assuming that he’s about to get stupidly paid, man. By and by, if it’s a boxing match, then I probably won’t tune in. However, if it’s a kickboxing or MMA bout, then Mayweather might have my attention, fam. At the end of the day, he might be testing the waters of other combat sports. Hell, he needs to before he even thinks about stepping in a cage with Khabib Nurmagomedov or McGregor. Either way, he’d still get mauled, bruh. That is all. LC out.

Man, the incompetence of Donald Trump‘s administration is staggering, son. I mean, I could talk about the fact that he publicly discussed classified info with Japanese Prime Minister Shinzo Abe at the Mar-a-Lago Club, but I’ll save that for another day. Side note, am I the only one who doesn’t like how Trump is having presidential meetings at establishments that benefit his business? *Sigh* Anyway, today’s target is Michael Flynn, former National Security Advisor. Now, it hasn’t even been a full month since Trump’s inauguration and Flynn has already had to step down for doing some fuck shit. The thing is, I can’t even say I’m surprised, man.

So, Flynn’s tomfoolery began when he decided to have private phone conversations with Sergei Kislyak, the Russian ambassador to the United States. That’s right, folks. Russia’s name is coming up YET AGAIN. In any case, both Flynn and Kislyak thought it was a good idea to pow wow about American sanctions against Russia. Keep in mind, their little bonding session occurred a full month before Trump even took office. Meaning, these fucktards had no business having these type of conversations under the previous administration. Now, it’s very clear that Flynn was aware of this fact because he flat out lied to Mike Pence about the nature of their communications.

To be EXTREMELY clear, I’m NO fan of Pence. However; if I were him, I’d be LIVID that Flynn was out here telling fairy tales. After believing Flynn’s assertion that nothing improper happened, Pence took to the media to defend Flynn’s name. Alas, the facade crumbled and now everyone involved is looking like a dumbass. Now, because of his insubordination, Flynn is out of a job… again. Remember, this is the same man who was previously fired by Barack Obama. Shit, he’ll be lucky if he’s trusted with the TV remote going forward. Flynn clearly has a hard time doing what he’s supposed to.

In the end, it’s a new day and Trump’s administration couldn’t wait to do some more mind-bogglingly dumb shit. I guess that’s just the nature of the beast, son. LC out. 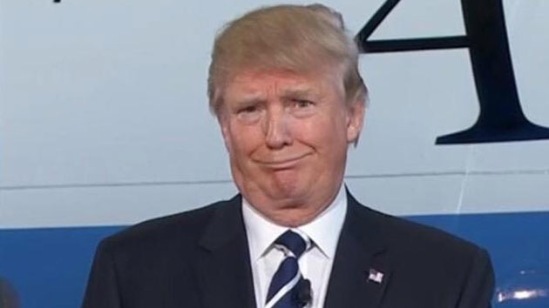 Ok, this has gone too far now. Over the course of Donald Trump‘s presidential campaign, he’s made a multitude of mind-numbingly idiotic comments. He’s made sooooo many ridiculous statements, there’s literally no way for me to document them all in a blog post. With that being said, up until this point, it’s all been under the guise of freedom of speech. In our wonderful country, we all have the right to utter just about any type of foolishness our hearts desire. However; when questionable intelligence is brought to the subject of nuclear weapons, we all need to be exceedingly afraid. So, I’m pleading with everyone in the entire United States: DON’T GIVE TRUMP THE DAMN NUCLEAR CODES!

Now, I’m not going to lie to anyone out there, man. When I heard Morning Joe Scarborough tell a story about Trump’s previous meeting with a foreign policy expert, I huddled in a corner crying from pure fear. Apparently, while this expert was giving Trump a crash course on international relations, Trump asked this individual on three different occasions why we couldn’t simply use our nuclear weapons. So, let me get this straight, son. Trump is receiving valuable knowledge about foreign policy and his FIRST reaction is to drop a nuke on someone? As in, take an action that hasn’t been taken anywhere in the world since the US did it to Japan twice in 1945? THAT’S his solution, son? Is anyone else out there freaking out about this, man?!

Look, just in case people are missing my point, let me explain myself a little more. It’s one thing to say wild things on the campaign trail. For God‘s sake, he’s a television “star.” He’s programmed to say and do things that’ll generate the most amount of attention. It’s something ENTIRELY different to be in a real meeting about issues that could potentially arise during a presidency and respond in such fashion. I’m actually not being facetious when I say this man might start World War 3 if he becomes president. I’m absolutely convinced that if he were elected, he would launch a nuke at some foreign country. In case people forgot, a presidential term is four years. FOUR years, man! If Trump is acting like this now, he will DEFINITELY press the button at some point during his presidency.

Listen, people, I know there are a variety of subjects that cause contention in this country, but this can’t be one of them. This man CANNOT become president. Forget race, gender, religious beliefs or whether you prefer Coke or Pepsi, this man is going to endanger us all. This isn’t a joke, son. This is Code Red, man! Code fucking Red! Now, for anyone who thinks this is a game, don’t call me for shelter when the left side of America has been blown off. I won’t help any naysayers during armageddon, bruh. Trust me, I’m already preparing for the worst. Good day, I hope…