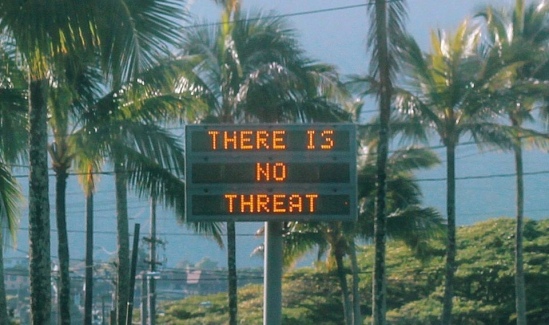 Look, this is a wild era right now, son. Like, it really feels like a nuclear catastrophe could arise at any minute, man. With that being said, we ain’t got the time to be worried about idiots who are bad at their job. I mean, a high level of incompetence resulted in the nonsense that occurred in Hawaii. All I know is, the good people down there didn’t deserve the fear that was unjustly instilled in them.

Ok, for those who missed it, some bonehead in the Hawaii Emergency Management Agency made a MASSIVE mistake. Now, on Saturday, an unknown individual sent out a message that said “BALLISTIC MISSILE THREAT INBOUND TO HAWAII. SEEK IMMEDIATE SHELTER. THIS IS NOT A DRILL.” Needless to say, Hawaiians lost their collective minds, fam! Shit, all of us would if we received a similar message, bruh! Listen, whether we’re speaking about North Korea or ISIS, there are real threats out there in the world. In any case, now is not the time to be making these kind of mistakes, folks!

Now, the agency has come out and said that the error occurred because someone pushed the wrong button. Apparently, instead of pressing “test alert,” some dumb-dumb pressed “live alert.” So, what, that’s all it took to send an entire state into panic, son? Like, there aren’t more safeguards to prevent this type of tomfoolery? Fam, what kind of idiocy is this? For fuck’s sake, who designed this backwards ass system, man? All in all, everyone down there should be fired for this brand of fuckery, fam!

In the end, I’m just glad everyone in Hawaii is safe, bruh. Yeah, they had an unnecessary scare, but ultimately, the alternative could’ve been REAL bad, son! By and by, a fake message about a ballistic missile is waaaaaay better than a real ballistic missile, fam. Now, instead of mourning the loss of fallen loved ones, we can make sure that inept assholes are no longer in charge of our safety. That is all. LC out.