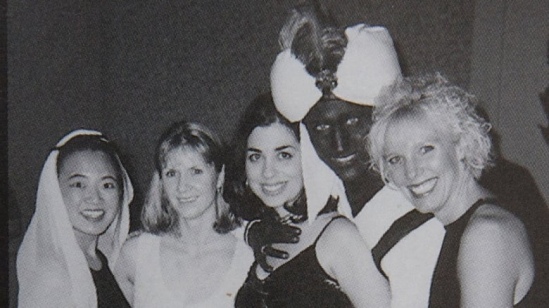 So, let me be honest, son. On the real, this post isn’t necessarily a “takedown” of Justin Trudeau. Frankly, I don’t know enough about his policies as Canada‘s Prime Minister to have a legitimate opinion, man. Shit, if people want to know about some of the tomfoolery going on in Canada, they should watch the “The Two Sides of Canada” episode on Netflix‘s Patriot Act with Hasan Minhaj. In any case, I’m here to address White people’s incessant need to wear brownface and blackface. Seriously, knock it the fuck off, fam.

Ok, for those who missed it, Trudeau, the Canadian darling of the Left, has found himself in some shit. Now, Time Magazine released an article yesterday that outlines some fuckity-fuck shit that Trudeau did in 2001. Apparently, while he was a teacher at West Point Grey Academy, Trudeau thought it was a good idea to wear brownface and a turban to an Arabian Nights-themed party. Furthermore, Trudeau also admitted to wearing blackface and singing Harry Belafonte‘s “Day-O” in high school. All in all, Trudeau was knee-deep in all types of tomfoolery, bruh.

Now, for the life of me, I truly don’t understand White people’s obsession with painting their fucking skin. Yes, I know that Trudeau is from Canada, not the United States, but that’s still not an excuse, son. Shit, it’s not like Canada is on the other side of the world, man. I refuse to believe that he didn’t know this shit was problematic, fam. I mean, he said he didn’t believe it was racist in his apology, but come the fuck on, bruh. As research tells us, America brought blackface to Canada in the 1800s. So, I’m not subscribing to them being naïve about this shit, folks.

Moving on, I need to send (another) message to White people. Attention, my Caucasian compatriots: blackface isn’t fucking ok. Brownface isn’t fucking ok. Look, if there’s ever a time where blackface seems like a good idea, please backflip off of a fucking roof and reconsider. The proof is in the pudding and the history is as clear as day: this practice is ROOTED in racism. Therefore, stop with the cotdamn idiocy, son.

In the end, there’s nothing else to say, man. Ultimately, Trudeau fucked up, fam. By and by, I truly don’t understand White people’s incessant need to color their skin, bruh. Now, as a disclaimer, I have to say that not all White people do this. Sadly, I have to mention that because people aren’t smart enough to know that I don’t mean everybody. Anyway, Justin Trudeau can miss me with his apology, son. That is all. LC out.