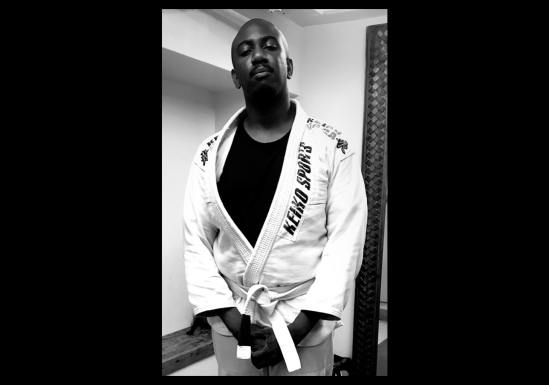 So, I won’t lie, son. On the real, I love fighting, man. Now, I haven’t been in a real fight in years, but I still need that type of aggression, fam. Shit, I grew up doing Taekwondo, I’ve boxed, I’ve done Muay Thai, Jeet Kune Do and general MMA. Needless to say, I’m semi-addicted to pain, bruh. In any case, last night was a first for me. Last night was the first time I took a real Brazilian Jiu Jitsu class. All in all, I’m still processing my experience, brethren.

Ok, to be clear, last night was not the first time I’ve rolled. Shit, thanks to previous MMA classes, I’ve had the pleasure of putting someone in and being put into a rear-naked choke and an armbar. However, those experiences didn’t necessarily prepare me for a full hour and a half of BJJ, son. Frankly, despite my years of martial arts training, I’ve learned that I don’t know shit upon shit about fighting on the ground, man.

Now, before I continue, I have to give a major shout-out to Babs Olusanmokun. The actor/BJJ black belt runs Babs BJJ out of Phil Nurse‘s The Wat school in lower Manhattan. Side bar, I have to give another shout-out to my wife for finding this school, fam. Keeping it a buck, she’s the real MVP, bruh. Anyway, since the spot is only a few blocks away from my job, I figured I’d give a class a test spin, son. All I know is, I wasn’t exactly prepared for this shit, man.

In any case, the class went as follows: I first learned to shrimp, followed by front rolls and back rolls. From there, I learned how to do the technical stand-up. Next, I learned the basics of the triangle choke. After that, I spent the majority of the class drilling kimuras with other white belts. Side bar, one of the white belts had one stripe and the other had three stripes. Meaning, we were not the same, fam. Frankly, both of those dudes could fuck me up, bruh. It just is what it is.

Moving on, I was involved in all of the activities until it came time to roll. Babs knew that I would get mangled if I got my ass down there, son. Instead, I just watched and came to the realization that a 5’5″ woman with a blue belt could choke the fuckity-fuck out of me, man. All I can say is, it was a very humbling experience, fam.

In the end, I’m still trying to process it all, bruh. Hell, look at my face in that above picture, son. Ultimately, that’s the face of a dude who got his innocence took, man. By and by, I’m pretty sure I’ll go back, fam. At the end of the day, I just need my knees to cooperate with me, brethren. The truth is, it’ll be easy as fuck for someone to double leg me if I don’t get lower to the ground. But, I only have one life and I need to try everything, people. That is all. LC out.

P.S. Someone tell my boy Fabo that I’m renigging on my word to roll with him. Son, I ain’t ready for that type of smoke. Talk to me in a year, man. Good day.