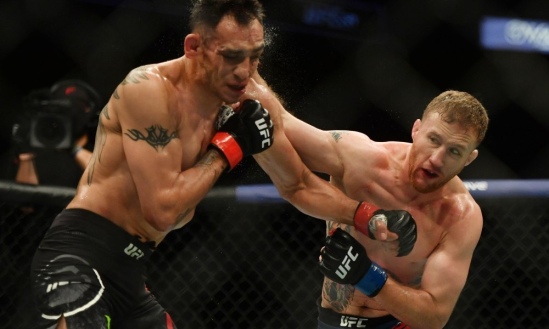 So, I won’t lie, son. On the real, this is a somber moment for me, man. I mean, while I’m a big Justin Gaethje fan, I’m pissed off for Tony Ferguson, fam. Like, how long have we waited for Ferguson to go up against Khabib Nurmagomedov? Shit, Dana White has tried to book that fight five times and five times that shit fell through. All in all, after UFC 249 and the beatdown provided by Gaethje, we’ll probably never see Ferguson take on Khabib.

Ok, for those who don’t understand my sorrow, let’s quickly breakdown the history of Ferguson and Khabib. Now, as I’ve previously stated, this fight has been scheduled five times. Four of those bouts were cancelled due to injury/illness. The last scrap was deaded because of the coronavirus. So, since Khabib has been “quarantining” in Russia, the UFC commissioned a fight between Ferguson and Gaethje for the Interim Lightweight Championship (a title that Ferguson already won before).

Now, to be honest, I was always worried about this matchup. Real talk, after those two losses to Eddie Alvarez and Dustin Poirier, Gaethje has been a different fighter, bruh. Hell, he still has bricks for hands, but he’s a lot more patient and way more calculated. Meaning, he’s picking his spots and THEN separating his opponents from their consciousness. So, I knew that he would be trouble for someone as reckless as Ferguson. The fact of the matter is, Tony walked into damn near EVERY punch that Gaethje threw, son.

Keeping it a buck, I have no idea how Ferguson lasted until the fifth round, man. The way I see it, any other mortal would’ve died in the first round against Gaethje. But, that toughness also comes with a price, fam. Frankly, Ferguson looked like a fucking car crash after that fight, bruh. All I can say is, Gaethje fought a perfect fight. Because of this, we’ll probably never get to see the chaos of a Ferguson and Khabib fight. *Sigh* Thanks, Justin Gaethje. Thanks a fucking lot.

In the end, I can only see one pathway to a Ferguson and Khabib match. Ultimately, as much as I hate to say it, Ferguson needs to go see Conor McGregor. By and by, if Ferguson can beat McGregor and Khabib survives against Gaethje, then the longstanding opponents might finally have their day in the sun. At the end of the day, Ferguson was a madman for accepting that fight against Gaethje. However, that’s also what made him a champion. Anyway, such is life, son. That is all. LC out.

P.S. I don’t believe Henry Cejudo when he says that he’s retiring. He, and his shenanigans, will be back (unfortunately). Good day.