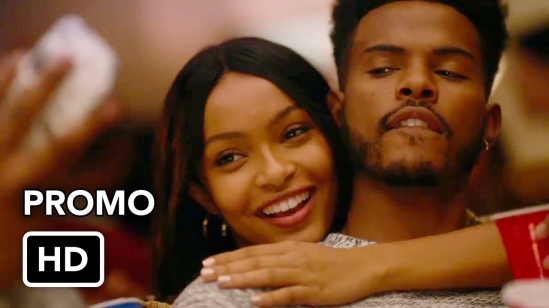 So, my wife and I don’t watch a ton of the same shows, but Grown-ish is something we can both agree on. In any case, last night’s episode fueled a heated debate between the two of us. Frankly, I vehemently disagreed with her rules for “girl code.” On the real, I feel like all of the characters are needlessly tripping, son.

Ok, for those who missed it, here’s a little bit of background: Zoey Johnson, the main character, used to have a crush on Aaron Jackson. During the first year of college, they flirted with the idea of hooking up, but nothing really ever happened. As a matter of fact, Zoey ended up dating a dude named Cash Mooney and now dates Luca Hall. Side note, she started dating Luca after Aaron shot his shot and she turned him down.

Moving on, Zoey’s homegirl, Ana Torres, started getting down with Aaron. The both of them neglected to tell Zoey because they were fearful of her reaction. Now, here’s where my confusion begins, man. Look, Aaron was never Zoey’s man AND they never smashed. On top of that, Zoey chose Luca over Aaron. So, where does she get off trying to dictate who can date who?

Now, my wife was like “if I ever called dibs, then the dude is off limits to my friends.” Huh? So, a woman can refuse to date a dude, not give him no ass and STILL claim him? Fam, get the flying fuckity-fuck outta here! Ana can’t possibly be breaking “girl code” if the dude never belonged to Zoey. Listen, if Ana smashed Cash or Luca, then Zoey would be well within her rights to beat the holy snot out of Ana. But, making googly eyes with a dude is not enough of a reason to lay claim, bruh. The truth is, if he was never her man, then who he fucks is none of her business, son.

In the end, I want to hear people’s thoughts on this. Like, am I bugging for thinking that Zoey is bugging? Ultimately, I don’t see how she can be upset when she didn’t want Aaron in the first place. By and by, she needs to worry more about Luca and less about who her former crush is banging. That is all. LC out.

So, as the title infers, I watch Black-ish, son. Now, I may not be as caught up as my wife, but I get my chuckles here and there, man. Anyway, over the past few episodes, shit has gotten real, fam. Basically, Dre and Bow are on the verge of a divorce, bruh. All I know is, as I’ve watched the last few episodes, I keep asking myself the same question: what the fuck are they fighting about? In my eyes, their relationship is failing for the same reason a lot of relationships fail: who the fuck knows?

Ok, allow me to keep it a buck for a second, son. Now, I’ve been in a relationship for almost ten years. In addition, I’ve been married for over a year. In any case, at times, my wife does shit that annoys me. For example, she’s always mooching off of my food without permission. Needless to say, I’m SERIOUS about my grub, folks. Side note, hey, babe, don’t hit me. This is all entertainment. Ok, love you, bye. Moving on, she hates it when I walk through the house with shoes on. Essentially, there will always be little things that annoy us about our significant others. By and by, the goal is to never let those small disagreements get in the way of love.

Now, Dre and Bow seem to have passed that point, man. Look, after twenty years of marriage, every problem is exacerbated. Real talk, it appears that every slight issue they have with each other has avalanched into something that’s bigger than it needs to be. All I can say is, it’s amazing how many real-life unions falter for the same reasons, fam. Ok, yes, a number of people break up over money issues and infidelity. However, a lot of people also break up over bullshit, bruh. I mean, that’s why “irreconcilable differences” are grounds for a divorce. Shit, folks reach a point where they don’t even know what they’re beefing about and just call it quits.

In the end, I think this fictional story is a perfect example of how NOT to conduct a relationship. Ultimately, before blowing up a life together, at least figure out what the real fucking problem is, son. By and by, I’m no relationship expert, but I’ll be damned if I don’t have an answer for the “how did we get here” question. At the end of the day, I have NO intention of getting a divorce, man. Hell, my life is great. But, God forbid if it ever happened, at least I’d like to have a clear picture of why, fam. That is all. LC out. 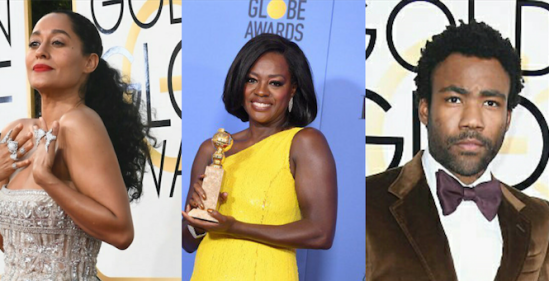 “I’m Black, y’all, and I’m Black, y’all, and I’m Blackity-Black and I’m Black, y’all.” Man, if anyone watched the Golden Globes last night, they would’ve probably heard those CB4 lyrics cycling in the background. All jokes aside, last night’s awards show was a great time for Black actors and actresses. After a year of exceptional work in both television and film, multiple Black stars were honored for their respective performances. Accolades were doled out for achievements both in front of and behind the camera. With that being said, let’s keep the party going and talk about all of our winners, son. Ohledoit!

Now, if we’re starting with television, we’ve got to give major props to both Donald Glover and Tracee Ellis Ross. First off, let’s talk about the fact that Ross is the first Black woman to win the award for Best Actress – Musical or Comedy since Debbie Allen. To put this into perspective, Allen won that award back in 1983 for Fame. To give even MORE perspective, Allen won that award before I was born and I’m in my early 30’s. Needless to say, it’s been a long fucking time, son. Ross has been killing it on black-ish for a while now. This honor is long overdue, man. Massive congrats to her.

Next, let’s talk about Donald Glover, aka Childish Gambino. This dude had an incredible night, man. Shiiiit, if we’re counting his “Awaken, My Love!” album and his soon-to-be stint as Star Wars’ Lando Calrissian, Glover had an incredible 2016, son. In any case, not only did he win the award for Best Actor – Musical or Comedy, but his show, Atlanta, also won Best Series – Musical or Comedy.

Keeping it a buck, Atlanta and Issa Rae’s Insecure were my two favorite shows of the past year. Both Glover and Rae made shows that were unapologetically Black and dared the mainstream to get onboard. Keep in mind, when I say “unapologetically Black,” I’m not referring to any stereotypical depictions of Black people. Both shows displayed the nuances of our community and depicted the fact that we’re not all a monolith. So, with a show like Atlanta being respected, it shows us all that we don’t have to dilute ourselves for recognition.

Moving on, let’s get to these movies, son. All I know is, all praises are due to Viola Davis and Moonlight. Davis won the award for Best Supporting Actress – Drama, Musical or Comedy for her role in Fences and Moonlight won Best Motion Picture – Drama. Now, even though I believe Davis should’ve been in the Best Actress category, it’s about time Hollywood recognized she’s one of the best in the game. She’s been a deity for quite some time now, man. They’re officially late to the party, son.

Also, to keep it going, Moonlight was the best movie I watched last year. If we’re being real, homosexuality can be a taboo subject in the Black community. However; this film does any amazing job of chronicling a man’s journey through self-realization and self-acceptance. There was nothing cliché about the storyline and it’s impossible to not be emotionally invested in the characters. Side note, I love absolutely EVERYTHING about Janelle Monáe. I’d find a way to marry her if my wife wouldn’t kill me first.

In the end, while we don’t need Hollywood’s acceptance to do great work, it’s still good to see them acknowledge our awesomeness. With or without their help, we need to continue pushing OUR art forward and telling OUR stories. That’s the only real way to shape our own narrative. Once again, congrats to all of last night’s winners, man. Good day.

P.S. I hate to end this post on a critical note, but someone tell the Golden Globes that Hidden Figures and Fences are two different movies. No, White people, we don’t all look alike and we don’t all act in the same movies. That is all.

P.P.S. Shout-out to Glover again for showing love to Migos‘ “Bad and Boujee“. That song is without a doubt the most enjoyable thing on the planet right now. Rain drop… LC out.