Man, at what point will Republicans say “enough is enough?” At what point will the GOP abandon their wayward leader? As of now, Donald Trump must be purposely trying to destroy democracy, son. I mean, why else would he continuously do such outrageously stupid shit? Look, all I know is, where there’s smoke, there’s fire, and the Oval Office is dealing with a five-alarm blaze right now.

Now, for anyone who missed it, there’s so much fuckery going on, bruh. It all began when Trump decided to invite Sergei Lavrov and Sergey Kislyak into the White House. To be clear, these men are Russia‘s Foreign Minister and Ambassador, respectively. Now, for the people keeping score, the American press wasn’t allowed in this meeting. However; pictures of this shindig surfaced on the Twitter account for Tass, a Russian state-run news agency. So, essentially, Russia had more insight into this gathering than our own people. Cool.

Moving on, this isn’t even the worst part of the story, man. Apparently, during this meeting with Vladimir Putin‘s cronies, Trump revealed classified information that could jeopardize an initiative against ISIS. Now, while the President has the authority to discuss anything he wants, the intelligence community is still scrambling to salvage whatever leverage they have against ISIS. All in all, Trump’s loose lips endangered vital intel and people. Side note, didn’t he run his entire campaign on the idea that Hillary Clinton couldn’t be trusted with classified information? Oh, ok, just checking.

So, with all of that being said, that’s not even the coup de grâce, son. Now, if anyone paid attention to the second paragraph, they’d notice that I mentioned the name “Sergey Kislyak.” This name is important because this is the same man who Michael Flynn got fired for speaking to! This is the same man who Jeff Sessions had to recuse himself over! Are you fucking kidding me, man?! Trump is really holding meetings with the dude at the CENTER of the collusion allegations against his administration?! Good fucking Lord, fam! How treacherous can one human being be?! It’s so fucking outlandish, son!

Ultimately, where are all of the Republicans with some cotdamn sense? All I know is, they need to distance themselves from this man NOW! Trump is taking this country straight to Hell and NO ONE is doing anything about it! Listen, at the moment, the GOP runs every branch of government. They have the power to put an end to this man’s madness. Please, for once, do the right fucking thing, folks! *Sigh* LC out. 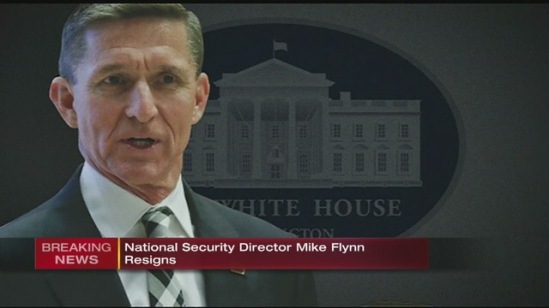 Man, the incompetence of Donald Trump‘s administration is staggering, son. I mean, I could talk about the fact that he publicly discussed classified info with Japanese Prime Minister Shinzo Abe at the Mar-a-Lago Club, but I’ll save that for another day. Side note, am I the only one who doesn’t like how Trump is having presidential meetings at establishments that benefit his business? *Sigh* Anyway, today’s target is Michael Flynn, former National Security Advisor. Now, it hasn’t even been a full month since Trump’s inauguration and Flynn has already had to step down for doing some fuck shit. The thing is, I can’t even say I’m surprised, man.

So, Flynn’s tomfoolery began when he decided to have private phone conversations with Sergei Kislyak, the Russian ambassador to the United States. That’s right, folks. Russia’s name is coming up YET AGAIN. In any case, both Flynn and Kislyak thought it was a good idea to pow wow about American sanctions against Russia. Keep in mind, their little bonding session occurred a full month before Trump even took office. Meaning, these fucktards had no business having these type of conversations under the previous administration. Now, it’s very clear that Flynn was aware of this fact because he flat out lied to Mike Pence about the nature of their communications.

To be EXTREMELY clear, I’m NO fan of Pence. However; if I were him, I’d be LIVID that Flynn was out here telling fairy tales. After believing Flynn’s assertion that nothing improper happened, Pence took to the media to defend Flynn’s name. Alas, the facade crumbled and now everyone involved is looking like a dumbass. Now, because of his insubordination, Flynn is out of a job… again. Remember, this is the same man who was previously fired by Barack Obama. Shit, he’ll be lucky if he’s trusted with the TV remote going forward. Flynn clearly has a hard time doing what he’s supposed to.

In the end, it’s a new day and Trump’s administration couldn’t wait to do some more mind-bogglingly dumb shit. I guess that’s just the nature of the beast, son. LC out.