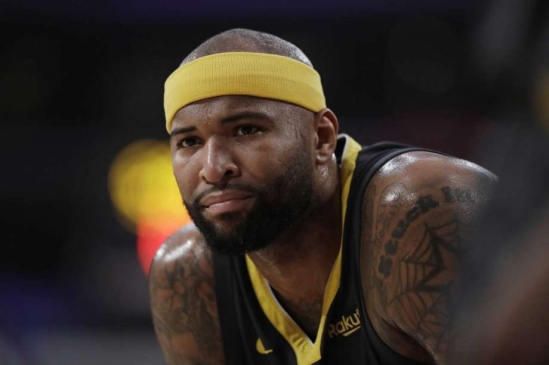 So, DeMarcus Cousins has had a tough couple of years, huh? I mean, where do I even begin, son? In 2018, while playing for the New Orleans Pelicans, Cousins tore his left Achilles tendon. Then, in April of this year, while playing for the Golden State Warriors, he tore his left quadriceps. Fast forward to August, his tore his ACL as a new member of the Los Angeles Lakers. All in all, his stock as an NBA player has taken a MAJOR hit due to his injuries. Now, on top of all of that, he’s wanted by police in Mobile, Alabama.

Ok, for those who missed it, an arrest warrant for Cousins has been issued in relation to a misdemeanor domestic violence charge. Now, as outlined in the leaked audio from TMZ, Cousins threatened to shoot Cristy West, his son Amir‘s mother, in the head. Honestly, I highly doubt that was a real threat, but that’s not the point, man. The fact is, no man is allowed to talk to anyone like that, especially not the mother of his child. In addition, West has alleged that Cousins has choked her in the past. All I know is, if her stories of abuse are real, then Cousins is a piece of shit, fam.

With all of that being said, here’s my beef with West, bruh. Now, after listening to the recording, the source of the tension was Amir’s presence, or lack thereof, at Cousins’ wedding. Apparently, before his marriage to Morgan Lang, Cousins asked West to let Amir attend the ceremony. She refused. He asked a few more times and she still refused. From there, Cousins lost his cotdamn mind and threatened to shoot her. All I can say is, it’s a terrible situation all around.

Now, am I excusing Cousins’ reaction? Fuck no, son. Frankly, he was deadass wrong for coming at her like that. But, why would she refuse his request, man? Like, if he truly wanted his son at his wedding, why was that a problem? In my eyes, it’s petty to keep Amir away on a day that meant a lot to Cousins. To me, that part of the story gets lost in the general narrative, fam.

Listen, dudes are often painted as deadbeats when it comes to parenting and the court system. A lot of times, it’s an accurate assertion, bruh. However, not enough emphasis is placed on women who don’t let men see their children. The truth is, that happens waaaay more than people like to admit. I know multiple stories of children who are used as pawns in a battle between parents. Real talk, everyone needs to grow the fuck up and realize that the kids come first, brethren.

Look, when I was in the doghouse years ago, my wife could’ve easily kept my son away from me. However, she didn’t, man. Shit, she would ignore me for everything else, but gladly call to say “come get your son.” Granted, it didn’t feel good being up shit’s creek, but my child was never taken from me, fam. Side note, during one of those past exchanges, she literally opened her apartment door wide enough to push the stroller out and then shut it right back. She haaaaated me, people. It’s hilarious now but was super awkward back then. Anyway, people need to put their pride aside and let parents parent. Well, unless that parent is an actual danger to the child’s well-being.

In the end, I see both sides to this story, bruh. Ultimately, Cousins fucked up by saying that foul shit to West. However, I also think West fucked up by denying their son access to Cousins’ wedding. By and by, this is a messy ass situation, son. At the end of the day, speaking as a dude from a broken house, keep the courts out of parenting, man. Hell, the ending rarely works out for anyone, fam. That is all. LC out.