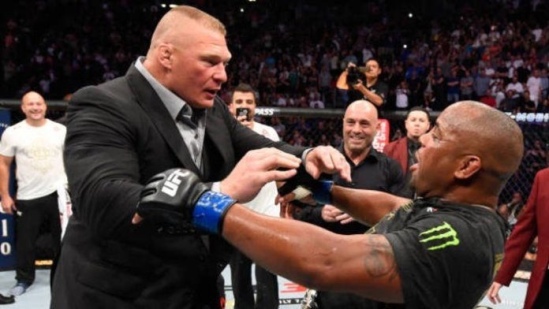 So, I won’t lie, son. I’m happy that Brock Lesnar is retiring from MMA. Frankly, no real fan wanted to watch him fight Daniel Cormier, man. On the real, the fact that this fight was ever a possibility is a fucking joke, fam. I mean, he’s only had two fights in the last eight years and he popped for PEDs in 2016. All in all, the sport won’t miss him, bruh.

Ok, for those who missed it, the proposed match between Lesnar and Cormier is off. Apparently, Lesnar informed Dana White that he’s retiring, so the UFC now has to change gears. Now, after the months of fuckery, the UFC is trying to schedule a rematch between Cormier and Stipe Miocic. Side note, this is the fight that should’ve happened from the beginning. Fuck all that Hollywood shit, son. The best should be fighting the best. Period.

Now, I never understood why Cormier wanted to fight Lesnar in the first place, man. Ok, yes, I know Cormier was looking for a big payday. But, that bout would’ve contradicted everything he claimed to stand for. Shit, he’s extremely vocal about being a clean athlete and often criticizes Jon Jones for his transgressions. So, his answer was to fight Lesnar, a man who’s also failed drug tests? Come the fuck on, fam.

In the end, I just want Miocic to get his just due, bruh. Ultimately, he’s achieved more than any other Heavyweight in UFC history. By and by, it was fucked up to see him being dismissed so easily. At the end of the day, I think the rematch with Cormier will be crazy. All I know is, that’s what real MMA fans want, son. That is all. LC out.