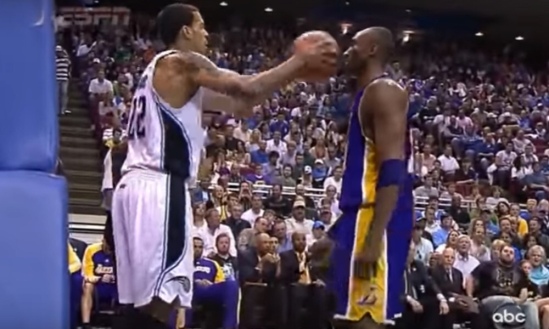 So, let me begin this post by saying that I’m not a Kobe Bryant fan. As a lifelong supporter/victim of the New York Knicks organization, I am forbidden to praise anything that he does, son. Regardless of that fact, I still have the ability to be objective, man. With that being said, Kobe Bryant still didn’t flinch in front of Matt Barnes, fam. All I know is, these new camera angles ain’t prove shit, bruh. It is what it is and it was what it was.

Ok, for those who are unaware, it’s been a longstanding legend that Kobe didn’t flinch when Barnes pump-faked the basketball in front of his face. Originally, based on the initial camera angle, it looked like Barnes did this millimeters away from Kobe. In any case, this incident has been used by Kobe fans to assert his thuggery, son. Side note, where was all that moxie when Chris Childs hit Kobe with the two-piece/no biscuit? I thought so. Anyway, as of yesterday, a new vantage point came out that challenged our view of the situation. Apparently, Kobe wasn’t standing directly in front of Barnes. In fact, he was slightly off to Barnes’ right side.

Now, I don’t need a reason to hate on Kobe, man. But, really, fam? Really? Did this new angle actually debunk the entire story? No, bruh. No it didn’t. Look, even with Kobe off to the side, Barnes still placed the ball inches away from his face. Real talk, the move was still close enough to get a reaction out of Kobe, son. The fact of the matter is, Kobe didn’t bite, folks. He still looked at Barnes like a peon who wasn’t worthy to be rocking an NBA jersey. All in all, I still see the video the same way, brethren.