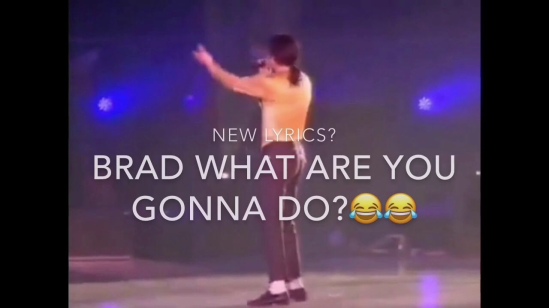 Look, let me get straight to the shenanigans, son. I mean, at this point, I shouldn’t have to explain Michael Jackson‘s GOATness to anyone, man. Now, since his birthday was yesterday, folks all over social media have been sharing videos of the King of Pop. In any case, I want to give a shout-out to my homie Evan for putting me onto a video he saw on Bryan-Michael Cox‘s Instagram page. All in all, this is bar none the funniest MJ video I’ve ever seen in my life, fam!

Ok, before I continue, I want everyone to watch the YouTube video below. For context, start the clip at 3:52 and watch until the end. It’s essentially the same video that Cox posted on his page. Anyway, during a show in 1996, MJ is performing “I Just Can’t Stop Loving You” with Marva Hicks. So, MJ’s already pissed because Hicks is inexplicably singing some of his parts. From there, Brad Buxer, MJ’s music director, misses his cue to end the song. Now, what happens next is without question the most hilarious shit I’ve ever seen during a concert: MJ sing-fires Buxer onstage.

Look, do people understand the magnitude of what I just said? Shit, without missing a beat, MJ sings to Buxer that there’s supposed to be a breakdown in the song. When Buxer doesn’t comply, MJ then adlibs “job gone.” For whatever reason, Buxer STILL doesn’t end the song! Now, after a couple more “breakdown” and “job gone” calls, MJ looks straight at Buxer and sings “Brad, what are you gonna do?” All the while, the audience doesn’t seem to have any idea of what’s happening, bruh. Hell, MJ was such a professional, everyone just assumed it was a part of the show.

Listen, as my dude Evan said, MJ harmonized a termination, son. Like, I can’t even put into words how comical that is, man. Real talk, I’ve been laughing for 30 minutes straight, fam. This video is hands down the most savage firing I’ve ever witnessed. All I can say is, people should’ve known better than to fuck up MJ’s song, bruh.

In the end, Rest In Peace to the King, son. Ultimately, MJ has given us more than enough examples of his legendary-ness. By and by, I’m going to get out of here and get back to watching this video, man. I mean, it’s literally the greatest clip on the internet, fam. That is all. LC out.