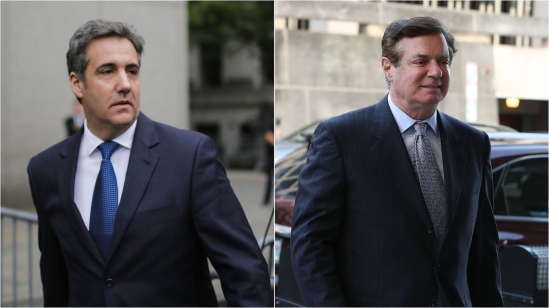 So, someone is going to prison, son. Specifically, Paul Manafort and Michael Cohen are most likely going to prison, son. All I know is, Robert Mueller ain’t playing with these motherfuckers out here, man. Shit, in one day, both Manafort and Cohen took massive L’s in the court of law. Now, regardless of what Donald Trump would like us to think, he’s in a world of shit, fam. Look, Manafort’s guilt might not rattle him, but Cohen’s guilt must be keeping him up at night.

Ok, for those who missed it, shit got real yesterday. To begin, Paul Manafort, Trump’s former campaign chairman, was found guilty on eight counts of tax and bank fraud. Basically, Manafort had been doing all manner of fuckery with his money, unbeknownst to the government. Now, that in and of itself would’ve been huge news, bruh. However, shit got even realer when Michael Cohen, Trump’s former lawyer, pleaded guilty to tax evasion, falsifying submissions to a bank and campaign finance violations.

Now, allow me to go into more detail about that last charge, son. Look, this is where shit gets murky for Trump, man. Essentially, Cohen admitted, under oath, that he unlawfully used money to pay off women for Trump. Even worse, he asserted that he did it at Trump’s request. So, Cohen definitively implicated the fucking President in a series of crimes, fam. *Sigh* What a day, bruh. What a fucking day.

Look, the way I see it, Cohen’s guilt is way more consequential than Manafort’s. As of right now, Manafort’s issues fall squarely on Manafort. But, Cohen’s issues go way beyond the man himself. Hell, the dude is out here saying that he has proof that the Leader of the Free World is a fucking criminal, son. I mean, what else needs to be said here, man? How much more tomfoolery has to occur before the GOP disavows Trump, fam? For God‘s sake, enough is enough, bruh. Trump is making a fucking mockery of his office, brethren.

In the end, it looks like Manafort and Cohen have respective dates with the Booty Warrior. Ultimately, prison is never worth all of the nonsense, son. By and by, there’s no going back now, man. We all need to see where this Mueller investigation goes. At the end of the day, this shit is off to a fiery start, fam. That is all. LC out.

P.S. Everyone needs to familiarize themselves with The Boondocks in order to understand the name of this post. Frankly, “A Date with the Booty Warrior” is one of the greatest episodes of any show ever. Shout-out to Aaron McGruder, bruh. Good day.