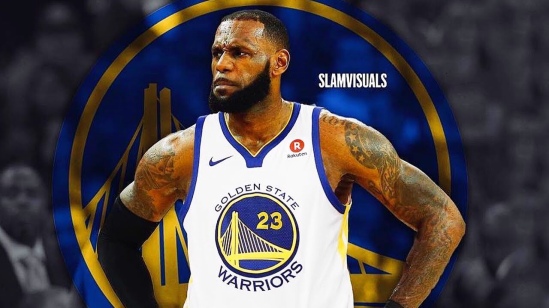 So, I won’t lie, son. I have no proof that LeBron James wouldn’t go to the Golden State Warriors. Frankly, I’m only making this assertion because my mind can’t grasp that concept, man. Like, my brain can’t handle the idea of LeBron making a superteam even more super, fam. Shit, it was bad enough when Kevin Durant went to GS, bruh! All in all, if LeBron actually went to The Bay, we might as well retire the idea of competition. Real talk, no one seems to want to battle with each other anymore.

Ok, so, for those who missed it, some interesting news just hit the NBA. Now, after this season ends, LeBron has the option to become an unrestricted free agent. Meaning, he could go to any team he wants. Apparently, he stated that if the Warriors were willing to free up some cap space for him, he’d entertain a meeting with them. Man, get the FUCK outta here, son! Good Lord, does everybody just want to play with one another now? Hell, the Dubs already have TWO MVP‘s on their team, fam! Why the fuck would they need another one? Give me a fucking break, bruh!

In the end, I completely understand that all of this is just conjecture, son. However; the idea of this alone infuriates me, man. Ultimately, this type of shit is exactly why I’m losing interest in the NBA, fam. At this point, why should I even bother watching any of these games, bruh? The outcomes are always predetermined because players just want to click up instead of duking it out with each other. On the real, I was originally critical of Kylie Irving, but now I’m happy he’s on the Boston Celtics. By and by, his move broke up some of the monotony, folks. *Sigh* I swear, none of these current players have any competitive spirit, people. It’s fucking disgusting. That is all. LC out.