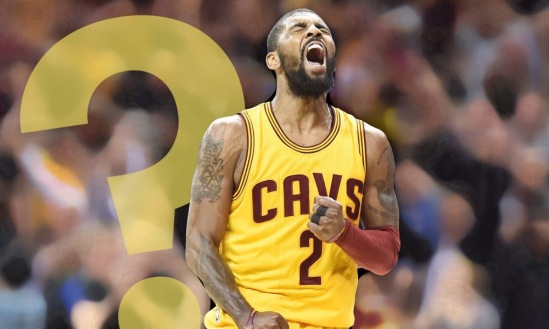 So, I won’t lie, son. I’m confused about all of this Kyrie Irving kerfuffle, man. Like, I truly don’t understand what this man is doing right now. I don’t get why he would want to leave LeBron James and the Cleveland Cavaliers. Frankly, it better be for personal reasons, fam. If not, this has to rank HIGH on the list of Dumbest Moves In NBA History.

Now, I won’t go into a lot of depth with this story, man. At this point, if people aren’t aware of the chaos in Cleveland right now, then they probably don’t care about basketball. With that being said, I question the motives of Kyrie’s desire to leave. From a basketball standpoint, it makes NO sense to me, fam. I mean, he’s coming off of three straight Finals appearances, where his team actually secured one title in the process. Not to mention, his last shot in Game 7 of the 2016 Finals is one for the ages. All in all, he’s an established winner on this team, son.

In any case, the rampant rumor is that he no longer wants to be in LeBron’s shadow. Apparently, he wants to run his own team and “can’t” fully flourish as a sidechick. Now, there are a few things wrong with that logic, son. First, Kyrie was The Man in Cleveland during his first three seasons in the league. Guess what? The team was fucking turrible, bruh.

Real talk, the year before LeBron came back, the Cavs only won 33 games, man. The very next year, the win total jumped to 53 and the squad went to the Finals. In addition, Kyrie’s stats weren’t drastically different from the previous season, fam. Meaning, a lot of that improvement came as a result of LeBron being on the team. Look, facts are facts, son. It just is what it is, people.

To add to that point, Kyrie is also coming off of his best year, statistically speaking. So, I’m really not understanding what he gains by leaving the organization. Listen, I highly, HIGHLY doubt he’ll get to the Finals by himself. He’ll either have to get past LeBron or the Golden State Warriors. On the real, neither of those scenarios are realistic, folks. It doesn’t matter if he plays for the New York Knicks, San Antonio Spurs, Miami Heat or Minnesota Timberwolves. He won’t sniff another Finals by abandoning ship, son.

In the end, Kyrie has to ask himself one question: does he want to win or be The Man? If he wants to win, then he needs to sit his ass down in Cleveland. If he wants to be The Man, I’m pretty sure my Knicks would gladly take him. Shit, I’d wholeheartedly root for him in that situation. However; I know it goes against common sense, man. Ultimately, all of this tomfoolery is making it easier for the Warriors to repeat, son. That is all. LC out.