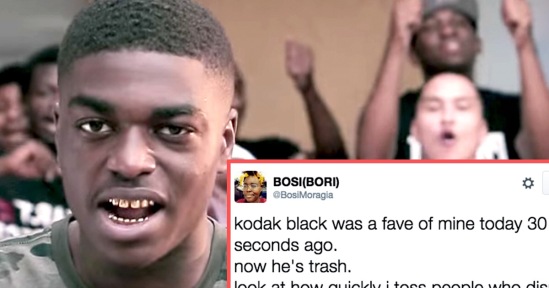 So, let me get straight to the point, son. I don’t like the narrative of the folks defending Kodak Black. Listen, when Kodak talks about only dating “yellow hoes” or “redbones,” he’s 100% feeding into the colorism issues in the Black community. On the real, his comments have nothing to do with preference, man. In actuality, they have everything to do with the fact that he sees something wrong with dark skin. Sadly, he’s not the first person to feel this way. *Sigh* Ask Lil Wayne.

Ok, before I continue, let me make one thing clear: I do believe we all have preferences when it comes to physical attraction. As for me, I love big breasts. Like, I LOVE big breasts, son. Now, I would go into more detail, but this is a free association blog and not erotica, man. With that being said, I’ve never had anything against women with a smaller cup size. I mean, before marriage, I’ve dated a lot of different women with many different body types. All in all, I’m an “equal opportunity” kinda dude, fam. In any case, I don’t believe the same can be said for Kodak.

Look, if people don’t believe me, just analyze what he said when he tried to explain his previous comments. When The Chaney TV asked him about his fuckery at a Master P charity basketball game, his response was worse than his original thoughts. Man, he proceeded to tell the lady conducting the interview that he likes women lighter than him because his complexion is “too gutter.” Apparently, dark-skinned women are “too tough.” In addition, according to Kodak, light-skinned women are “more sensitive” and he can “break ’em down more easy.”

Now, how in the FUCK is any of that nonsense about preference, bruh? Fam, this dude is literally out here spewing stereotypes that can be traced back to slavery. Historically speaking, a lot of dark-skinned slaves worked in the hazardous fields while a good number of light-skinned slaves served in the master’s house. Shit, was else needs to be said here, man? Essentially, Kodak admitted that he doesn’t like his skin color and dummies are out here caping for him. Son, I truly don’t understand the ignorance of some people. I really don’t.

In the end, miss me with the Kodak theories. By and by, his skin color quotes have NOTHING to do with preference. All I know is, this child clearly has a bias against his own skin and I’m not going to let that shit slide, son. Real talk, I just want this clown to disappear, man. Him and his diamond-studded baby teeth. That is all. LC out.