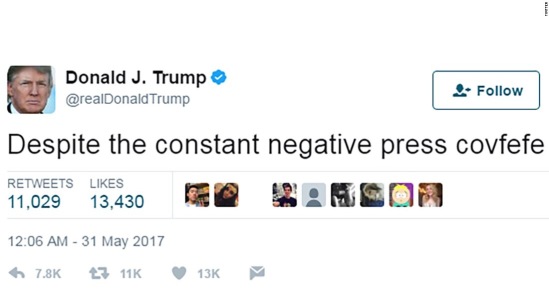 So, to be real, I wasn’t even going to write about this story, son. I mean, keeping it a buck, Donald Trump‘s inability to spell is not news. Look, his grammatical error game is strong on Twitter, man. Frankly, I’m surprised when he’s actually able to tweet a coherent thought, fam. That’s how rarely that event occurs, bruh. In any case, I don’t like how this nonsense is distracting us from the Trump administration’s usual fuckery. In any case, LC is here to remind everyone of just that, son.

Now, before I continue, let me get one thing out of the way. Man, someone needs to put Sean Spicer out of his misery, bruh. Listen, defending Trump MUST be killing him inside. Fam, this dude really stood behind a podium and said “the President and a small group of people know exactly what he meant.” Good fucking Lord, man! This administration can’t even admit to a fucking typo, son! That statement is one of the most preposterous collections of words I’ve ever heard in my life. Look, Spicer, NO ONE believes that bullshit, man! Absolutely no one.

In the end, we all know Trump is an idiot, man. That tidbit is not news. At this point, we all need to be worrying about the inner workings of this administration. Ultimately, the FBI and the intelligence committees need to get to the bottom of the real tomfoolery, son. Until then, please keep the stupidity out of the media, fam. Thanks. LC out.