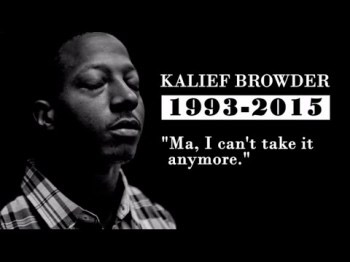 Keeping it a buck, I rarely cry, son. Look, I’m not trying to sound macho when I say that, but it’s simply the truth. I didn’t cry when my sons were born and I didn’t cry when I got married. Tears just don’t seem to hit me very often, man. With all of that being said, I cried last night. I legit shed tears in the aftermath of watching Time: The Kalief Browder Story on Spike. At this point, I have so many thoughts that it’s actually hard for me to properly articulate myself. All I know is, when it comes to being Black in this country, any of us could be Kalief Browder.

Now, even though my life has been very different than Browder’s, there are several ways I feel connected to him. Despite being eight years younger than me, Browder and I are both Bronx kids. We both grew up under the tyranny of Rudy Giuliani, Ray Kelly and the stop-and-frisk era. We both knew what it was like to be harassed by police when we were just minding our own business. When I learned that a 14-year-old Browder caught a felony for joyriding in a bread truck, I immediately thought of all of the dumb shit I’ve done that I’ve never been busted for. It’s sad to say, but inner city life can be very homogeneous for the people in the community.

Moving on, the aforementioned felony is notable because it would ultimately lead to Browder’s downfall. After Roberto Bautista falsely accused a 16-year-old Browder of robbing him, the subsequent arrest ensured that Browder would have to go to jail. Even though he was innocent of the claim against him, he still ended up on Rikers Island. From there, Browder was consistently abused by his fellow inmates and the guards. During his three years in jail, he spent 800 of those days in solidarity confinement. Despite repeatedly asking for a trial, prosecutors only offered him plea deals that would make him serve 15 years in prison. Essentially, Browder was abused by every single facet of the criminal justice system.

To make matters worse, his mother couldn’t raise the $900 that would bail him out of jail. So, on top of being unfairly criminalized because he was Black, Browder also suffered because he was poor. The pain of his story is exacerbated by the fact that this type of injustice occurs often. To put it plainly, Browder wasn’t the first person to be destroyed by the law. Sadly, he won’t be the last one either.

On the real, even though I already knew Browder’s story, last night hit me hard. Honestly, all I could do was think about my two sons. Due to what I’ve accomplished thus far in life, the prospect of paying $900 for bail wouldn’t kill me. However; what about Browder’s mother, man? Why did she have to lose her son because of poverty? In addition, why are Black youth always treated like menaces? This is exactly why I’ll NEVER forgive Hillary Clinton for her “superpredators” comment. It’s that type of logic that makes it okay to bury our children in the prison industrial complex.

All in all, after writing this entire post, I still feel like I haven’t said anything. Ultimately, Browder killed himself because he couldn’t continue living through the pain. He couldn’t continue reliving all of the anguish and desperation. *Sigh* I don’t know what else to say here. LC out.

One response to “I Shed Tears For Kalief Browder”