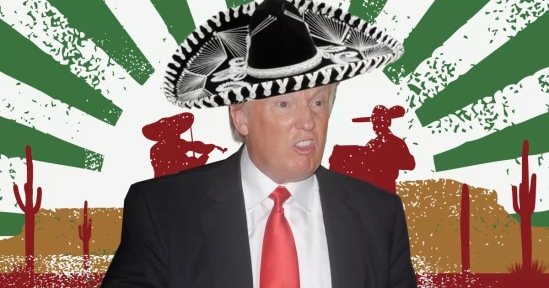 So, the debate, huh? They’re all finally over, huh? Thank the Lord, son. I couldn’t take one more of these outrageous debacles. I mean, if I really wanted to have my intelligence insulted, I’d go argue with a New England Patriots fan about the “Tuck Rule.” Side note, Pats fans, let’s cut the bullshit, man. Tom Brady fumbled the ball in that game. We all saw it on camera, bro. In any case, I’ve officially had enough of this presidential election. I’m tired of commenting on it and I’m tired of seeing the faces of Donald Trump and Hillary Clinton. With that being said, good ol’ Trump left us all with one last gem: “bad hombres.”

Look, if anyone pays any attention to the news today, all of the pundits are on fire about a different Trump comment. Essentially, the man said he can’t guarantee that he’ll accept the outcome of the election if he loses. That statement is unprecedented because no other candidate has ever questioned the voting process this much BEFORE people went to the polls. In my eyes, he’s looking for an excuse for his inevitable loss. At this point, he’s behind is damn near every poll, son. So, instead of chalking his failure up to his ridiculous campaign, he’d rather point fingers and make nefarious allegations about voter fraud. Please note, these theories have been debunked by nearly everyone with a brain.

Now, while his stance about voting practices is the talk of the town, I’d rather speak about his “bad hombres” statement. Man, this dude just refuses to leave Hispanics alone, bro. Since the beginning of his campaign, he’s blamed Mexicans and other Hispanics for basically all of the crime going on in this country. Either they’re rapists, drug dealers or just crooked people. Yet and still, he somehow believes Hispanics will vote for him in a few weeks. I really don’t understand how that man thinks, son. He throws them under the bus EVERY chance he gets and still wants them to support him. That’s like me repeatedly kicking someone in the nuts and then looking for them to give me a job referral. It doesn’t work that way, bro. Not at all.

Ultimately, the “bad hombres” comment was the pinnacle of condescending rhetoric. Not only is he making unwarranted accusations about an ENTIRE group of people, but he’s mocking their language in the process. I mean, I can’t even properly quantify how fucked up that is, man. That’s like a cop saying “it’s lit” right before putting five bullets in my ass. This dude is a straight up cartoon character, but none of us find him funny. Wait, that’s probably why he’s always orange, man. He really is playing the part of a clown, son. All in all, I’m just glad this election cycle is nearly over. Now, we all need to make sure we do our part to keep this man FAAAAAAAAAAAAAAAR away from the Oval Office. Good day.