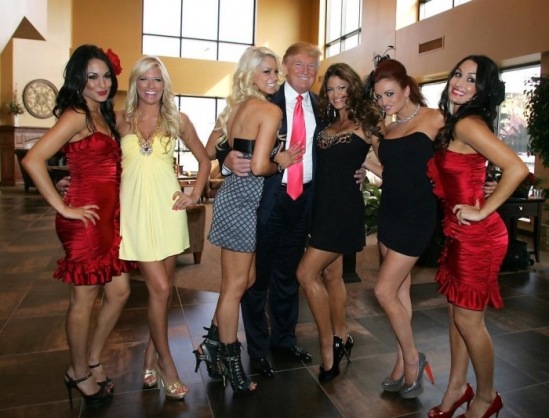 Now, let’s be real for a second, son. Of COURSE I’m talking about Donald Trump today. I mean, did anybody really think I was going to let his latest batch of tomfoolery slide? On the real, how can anyone who breathes air endorse this guy? How can anyone who breathes air BE this guy?! Every time I think it’s impossible to top the copious amounts of insanity he’s said, some new shit comes out. With that being said, let’s talk about Trump’s most recent philosophies about women.

Look, to start, I’m not going to spend too much time on last night’s debate. It was exactly what I thought it would be: a pure shitshow. Instead of being on the defensive, Trump came out swinging, launching a bunch of accusations at not only Hillary Clinton, but Bill Clinton as well. Even before the debate, Trump held a press conference with four women who claimed to either be sexually assaulted by the former president or wronged by Hillary. In any case, the debate devolved into one of the ugliest spectacles I’ve ever seen, which is exactly what Trump and company wanted.

So, why was Trump so desperate to create a distraction? Because of a video that surfaced over the weekend of an outrageous conversation he had with Billy Bush in 2005. While on the set of “Access Hollywood,” Trump was recorded speaking about how he approaches attractive women. Apparently, in his world, it’s perfectly ok to “just start kissing” women and “[grabbing] them by the pussy.” To him, these are appropriate actions because celebrities can essentially do whatever they want. Now, I don’t have to speculate about his mentality because he literally said “when you’re a star… you can do anything.” That’s actually a statement that came out of his mouth, son. Honestly, “flabbergasted” isn’t even a strong enough word to describe my reaction, man.

Now, as expected, all of the people who heard these remarks were as taken aback as I was. The outrage even extended to Trump’s own party. So far, he’s been condemned by Paul Ryan, Reince Priebus, Mitt Romney, John McCain, Jeb Bush and myriad of GOP faithful who were appalled by Trump’s words. In addition, a number of Republicans have even demanded that Trump drop out of the presidential race. However; we all know Trump would never do that. Quitting has never been the man’s style.

Moving on, according to him and his campaign, his comments were nothing more than “locker room talk.” Apparently, this is the way men talk behind closed doors. Come the fuck on, son! Last time I checked, I’ve been a man my entire life and I’ve NEVER participated in a conversation like this! When it comes to the men I know, we talk about what we would do if we had the opportunity to get down with a chick. But we NEVER endorse sexual assault, man! Nowhere in Trump’s statements did he speak about consent. In actuality, he said he does things because he knows he can get away with them. Bruh, that’s textbook rape. At this point, anyone who disagrees is advocating violence against women. Plain and simple. On the real, the same men who consider this “locker room talk” are probably the same men who sympathize with Brock Turner, Austin Wilkerson and David Becker.

In the end, the scariest part of this is, after last night’s debate, Trump’s constituents will probably still continue to support him. Based on some early reviews of his performance, he’s been getting positive feedback for seemingly pushing Hillary against the ropes. All of this proves that morals are an obsolete idea. Party unity is more important to everyone than having an actual belief system. With that being said, voting is still vital. I know I’ve said that a number of times on this site, but I can’t stress this enough, man. This November‘s election is of the utmost importance. Everyone needs to use their voice. Good day.

P.S. Does anyone else find it sexist that Bill’s alleged misconduct is always brought up to smite Hillary? SHE’S the one running for president right now, not Bill! If the jabs have nothing to do with her directly, keep them out of this race. She shouldn’t have to suffer for what her husband may or may not have done. That is all.